How often did your parents tell you, “You’re never going to make money playing video games,” or “you know, video games aren’t healthy for you?” From Gen Xers to the Gen Z generation and everyone in between, many of us have heard these axioms more than a few times when we were growing up. But, parents worldwide may have failed to see the forest for the trees on this one.

Today, we live in a society where both those tenants could not be further from the truth. Some professional gamers are reported to make as much as $50K/hour and garner sponsorships from global brands.

See related: “Pro gamers can get paid up to $50,000 an hour to play newly released games”

And esports experiences have also evolved to become a proven way for players to make personal connections, build relationships, and further interpersonal skills—all important components of social health and wellbeing.

The NIRSA Championship Series’ recent debut National Esports Championships turned out to be a massive success for all involved. As esports opportunities continue to become more mainstream offerings from campus recreation departments, it’s important to know how these offerings are connected to a campus’ underlying goal of supporting the health and wellbeing of students.

After speaking with a few NIRSA members involved in esports, I learned about some of the obstacles departments have faced implementing esports programs and just how impactful those programs have proven to be for the health and wellbeing of players both on and off campus.

See related: “The rise of esports in campus recreation”

Historically, there have been many stereotypes to describe esports and video games, beyond just the two named earlier. Greg Durham, Director of Recreation and Wellness at Creighton University and former Chair of the NIRSA Esports Task Force describes some of the more common stereotypes: “I think when people are unfamiliar with esports or video games they think about an absence of physical activity or not a lot of social connection,” he says. “When they think about the stereotypical gamer, the profile is probably just one person, alone in their basement, with no lights on and a 40oz bottle of Mountain Dew as the only decoration in the room. But that picture is something that is probably 10-15 years out of date.”

Greg explains that there are other negative stereotypes about esports that remain challenges for the esports and gaming industry at large. There is a perception, he explains, that many games “are not inclusive of marginalized folks or women.” Outdated and ongoing stereotypes have hindered esports initiatives at various institutions’ recreational departments—especially in the years before the COVID-9 pandemic. “A couple of years ago, a lot of directors around the country were very adamant that esports were not consistent with the mission of recreation,” says Ashley Lax, Assistant Director of Sport Programs at the University of Wisconsin-Madison and NIRSA Championship Series Chair.

See related: “A leader for the future”

Ashley, for one, is grateful that the campus recreation profession has expanded its thinking when it comes to esports programs. And also thinks that there is still room for the profession—and society at large—to expand its perspective as we look for more ways to build community for students on and off our campuses.

Benefits of engaging in esports

In contrast to the negative stereotypes, esports actually may contribute to some of the most important pillars of health and wellbeing. Research published in the Recreational Sports Journal has shown that recreation participation enhances students’ sense of belonging.

See related: “Impact of a University Recreation Center on Social Belonging and Student Retention” | “Examining the Relationship between Intramural Sports Participation and Sense of Community among College Students” 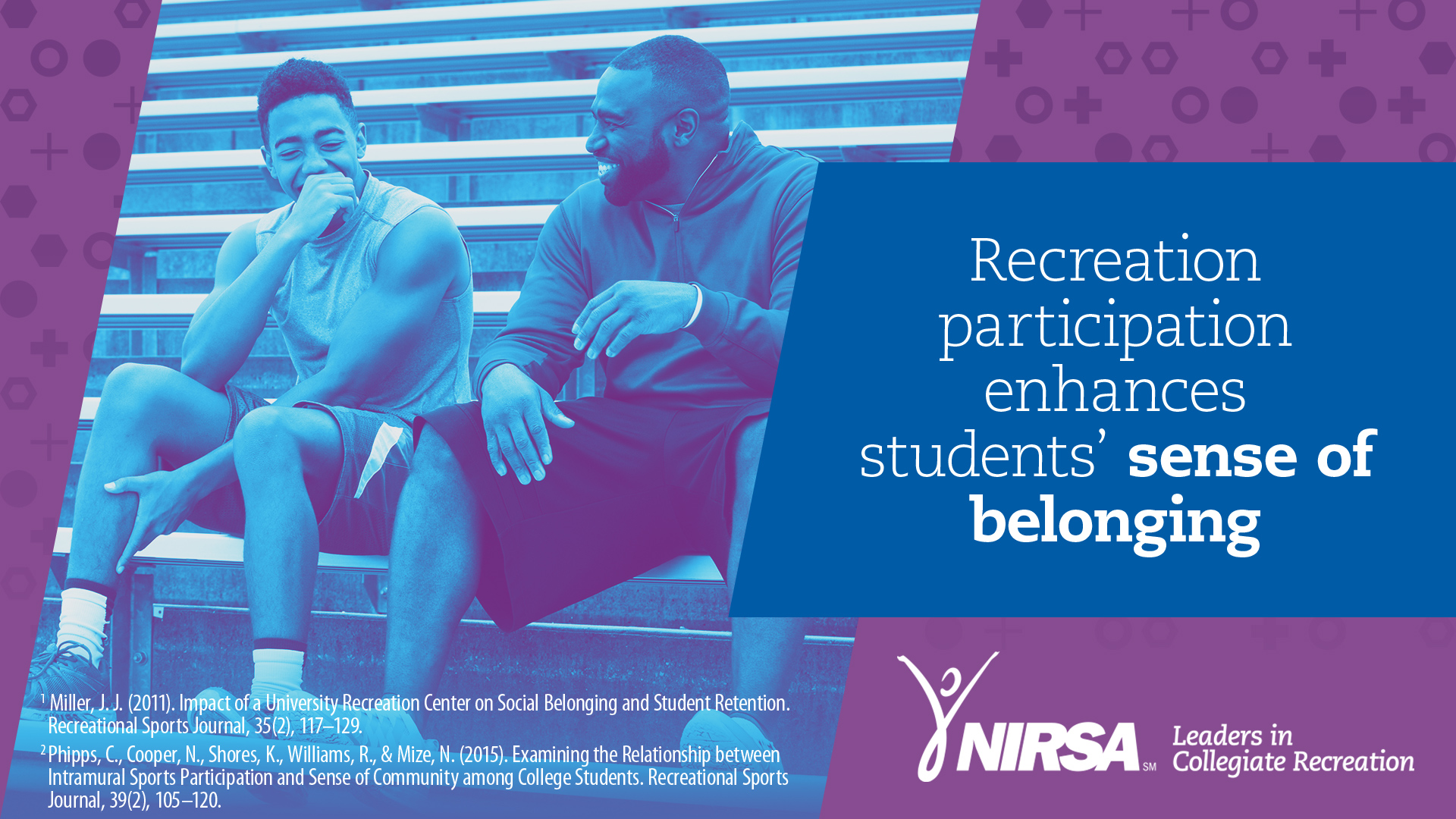 Explore the full suite of slides articulating the value of campus recreation.

And it isn’t just a sense of belonging that campus recreation professionals are fostering among students through esports programs. The professionals I spoke with also attest to benefits among participants social and mental health, and report instances of engagement—especially among a contingent of users who may not have been involved with campus recreation programs otherwise.

Both Greg and Ashley agree that community is at the heart of what esports offers. “I think one of the most impactful benefits when it comes to wellbeing and esports is that community piece—finding other like-minded individuals who give you that sense of belonging,” says Ashley. Greg adds, “In some games, you can get five, ten, twenty, or more of your peers, colleagues, or teammates to achieve a common goal. You’re problem solving, talking, communicating, and socializing. I think it gives people opportunities to connect with peers all over the country and—in some cases—all over the world.” This is an experience that traditional sports cannot offer.

Additionally, when everyone was asked to lockdown during the coronavirus pandemic, many individuals used esports and video games as an outlet to relieve stress and interact with friends. Esports “let them maintain high levels of social interaction—something I don’t think we talk about enough.” It also “kept people from participating in other destructive behaviors like abusing drugs or alcohol.” Plain and simple, esports and video games “help with mental health. That’s just a fact,” according to Greg.

It’s important to remember that negative stereotypes of all types persist in the absence of education. This is certainly the case when it comes to esports. Unhealthy habits and harmful stereotypes ultimately defeat and undo the goals of health and wellbeing. “You can over workout, you can overeat, and you can overdo so many things that take place in a rec center—video games are no different. It’s all about moderation,” explains Greg. This is not only true of recreation programming but applies to all facets of life.

Esports now is gaining an important place in the college recreation profession. As it continues to grow, more stereotypes will be created. It is crucial to break these down by arming yourself with the knowledge to educate others about just how beneficial esports can be to an individual’s wellbeing.

Charles "Chuck" Steines is currently a student at Elon University and a member of the Elon Club Soccer Team. He is also currently interning at NIRSA Headquarters. You can reach him by email at csteines@elon.edu.