Founded in 1957, Oakland University was created when Matilda Dodge Wilson, heiress to the Dodge automaker fortune, and her second husband—lumber baron Alfred Wilson—donated their 1,443-acre estate to Michigan State University. The donation included the sprawling grounds over rolling hills, the estate’s contiguous mansions, and some two million dollars to establish what was originally known as Michigan State University-Oakland. The name was changed to Oakland University in 1963 and by the 1970s the affiliation to Michigan State was dropped. Up until the 1990s, Oakland functioned as a state-supported commuter college without much in the way of campus life before establishing a much more robust campus environment by expanding the student union, building new residence halls, and creating a campus recreation center.

“When I came to Oakland University 25 years ago, the big opportunity was to help imagine, build, staff, and program a brand-new recreation center, literally from the ground up,” says Greg Jordan, the Director of University Recreation and Well-being. “I see my work as making a difference in people’s quality of life through physical activity and programs that are now expanding into nutrition, mental health, and other types of wellbeing. I like knowing that people feel better, do better, and are more productive because they use our facilities.” 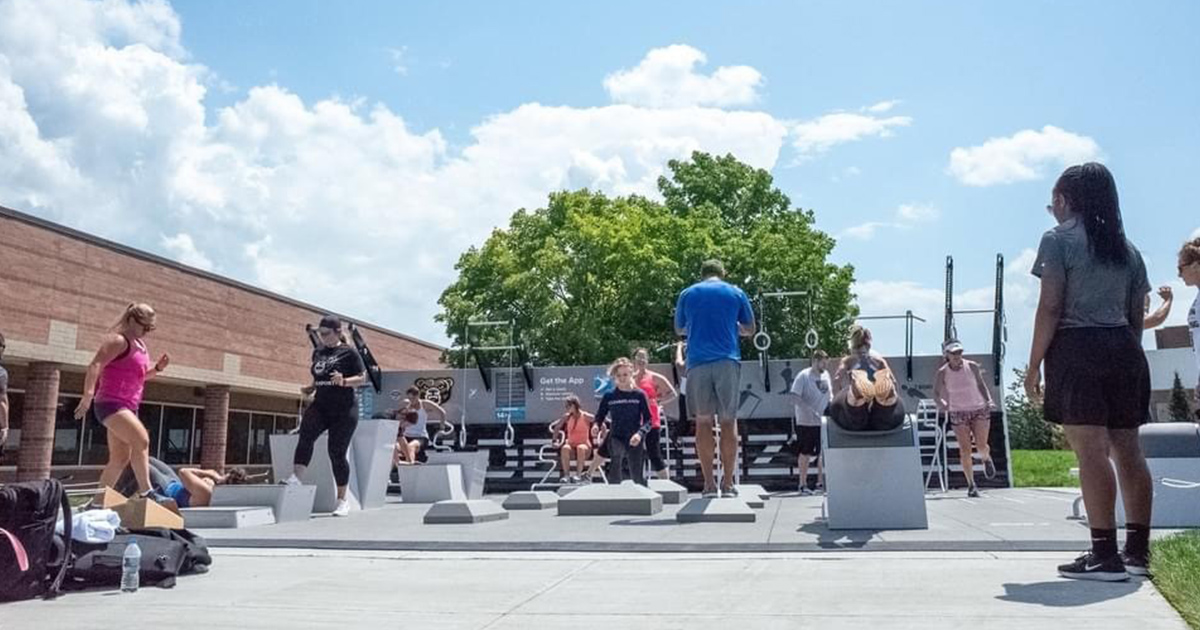 Throughout his more than 30-year career, Jordan has stayed current on issues and trends in higher education recreation and wellness through his involvement in NIRSA: Leaders in Collegiate Recreation. He has been a strong participant in NISRA, serving as president in 2006 along with multiple appointments to boards, leadership groups, and think tanks.

“Oakland University strives to cultivate the full potential of a diverse and inclusive community,” says Greg. “Unlocking the potential of an individual is a whole-body process. Recreation and fitness are critical components of whole-body success.”

In the late summer of 2018, when Greg was approached by the National Fitness Campaign about considering a publicly accessible outdoor gym designed around community engagement, he was immediately impressed.

“I got an email with a link to a video the National Fitness Campaign put together about who they are and what they do, which is this incredible, self-contained Fitness Court designed around bodyweight movements,” says Greg. “Honestly, they had me at hello. I shared the video with our senior leadership, and we all agreed this was something that fit perfectly with our vision and values.”

“Through bodyweight movements, National Fitness Campaign’s Fitness Court facilitates a very safe, effective workout for users of all ages, abilities, and levels of fitness intensity,” says Mitch of the program he founded. “However, we are just as much a social enterprise as a business enterprise. As a consultant, we work with our partners to select the ideal site, train staff on how to use it, and provide resources to help fully activate it once it is built.”

Finding the ideal location for a Fitness Court is one of the most important decisions to make in the process. Ideally, the chosen spot should be publicly accessible within a dense population of potential users and visible from a distance. At Oakland University, after considering several locations across campus, Greg and his team in Recreation and Well-being ended up right outside their front door. 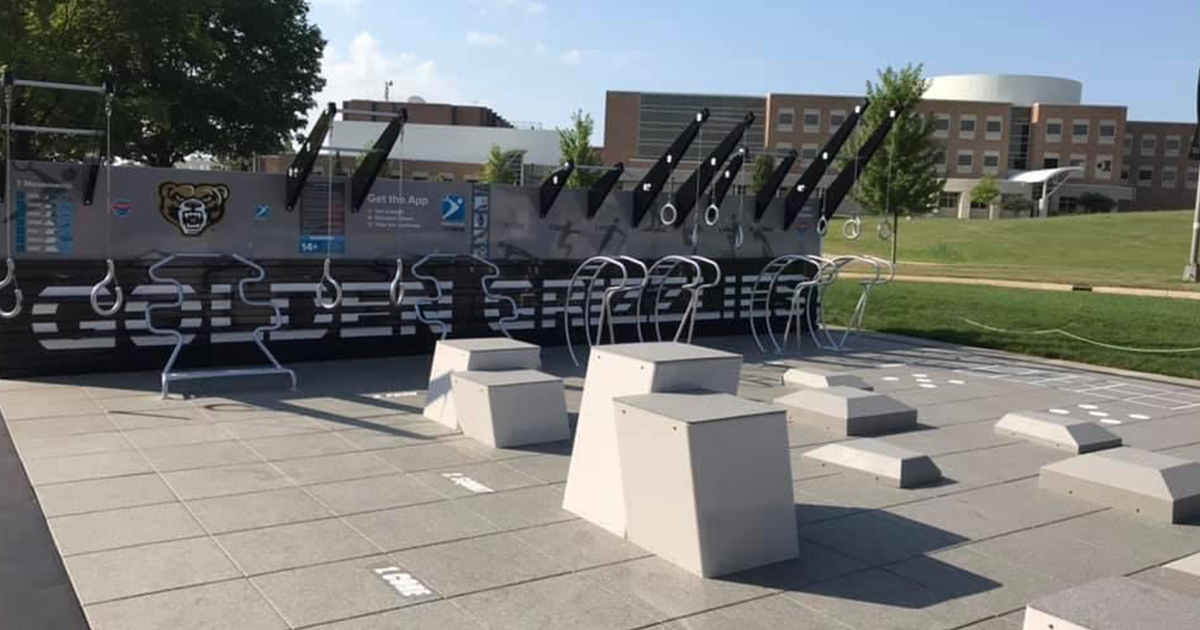 “When you want to build something on a university campus, it generally gets into a committee review by administrators where there can be competing agendas,” says Greg of the approval process. “We ended up deciding to put our court near the front doors of the recreation center. We had an underused space that was suitable and very easy to maintain and monitor.”

While determining to build a Fitness Court and siting it outside of the campus recreation center were easy decisions to come to at Oakland University, funding construction can be a more complicated matter in some cases. At a cost of approximately $150,000 to buy and install, National Fitness Campaign’s Fitness Court is an investment that can necessitate external support.

“Our goals are bigger than promoting a product. We are committed to helping our partners find ways to fund these Fitness Courts too,” says Mitch. “Our experience is not just with fitness but significantly with building fundraising partnerships. We help partners like Oakland University jump start the process by providing a complete tool kit of materials and resources they can use to attract key sponsorships for their Fitness Courts.” 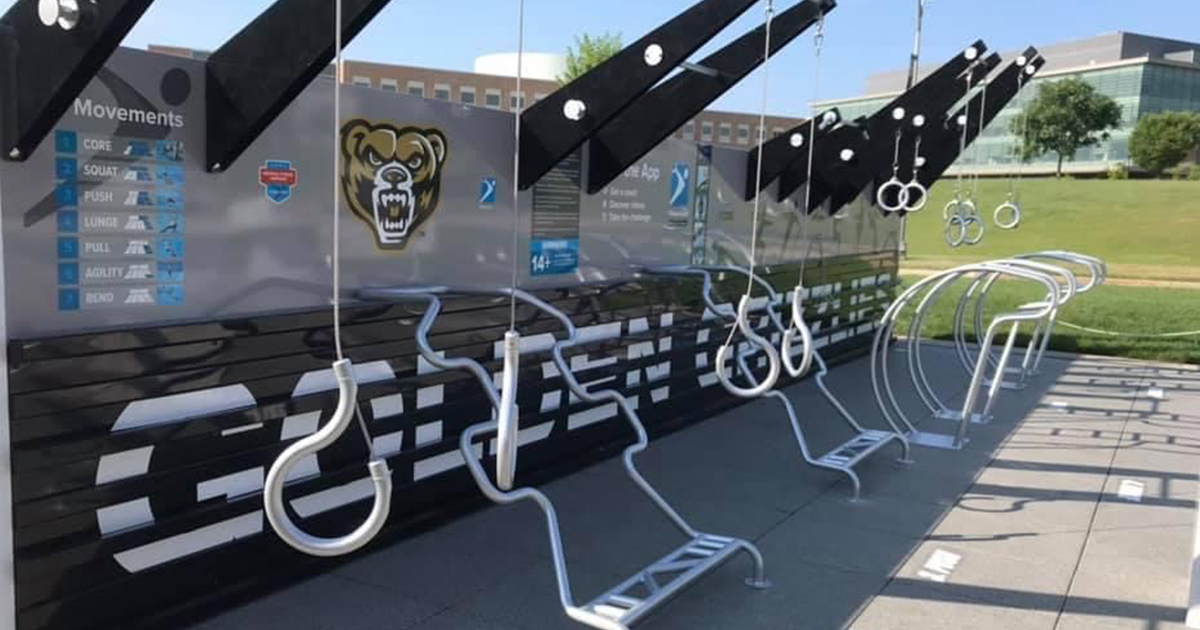 “Once we introduced National Fitness Campaign to Priority Health, they really stepped up,” says Greg of the relationship that helped Oakland University set up a custom court incorporating school colors in less than a year from their initial interest date. “Not only did Priority Health help fund our Fitness Court, in December of 2020 they announced a $600,000 statewide partnership with the NFC to build 15 more courts across Michigan,” Greg adds.

Since the Priority Health Fitness Court at Oakland University was opened in the fall of 2019, student and community use have been consistent. Greg and the Oakland University team have hosted dozens of outside observers considering a court of their own along with countless fitness instructor training sessions intended to help optimize user experiences and benefits.

“National Fitness Campaign’s commitment to human health and wellbeing is about much more than making a profit,” finishes Greg. “It’s about offering fitness for free and making lives better for both individuals and communities.”