Where are they now? Emily Abrams

Emily Abrams got her start in collegiate recreation as an undergraduate student at Oregon State University. “I first got involved working at the Oregon State University Challenge Course,” she explains. She had a background of working with summer camps and running team-building programs, so the challenge course felt like a natural fit. She says, “Once the challenge course season slowed down, I started working at the indoor climbing center.” She came to enjoy working in rec so much that she decided to apply for graduate assistantships in the field.

Finding a future in recreation

This decision brought her to the University of Texas at Austin where she was the GA for Outdoor Recreation. It was as a graduate student that Emily received a William Wasson Endowed Scholarship through the NIRSA Foundation. “My scholarship helped me to attend the 2015 NIRSA Annual Conference in Grapevine, Texas. Receiving the scholarship was meaningful to me because it was validation of my path up to that point,” she explains. “College brings a lot of challenges and moving across the country for graduate school was stressful. Receiving the scholarship let me know that it was worth it, and that there can be successes in the midst of hardship.”

“Receiving the scholarship was meaningful to me because it was validation of my path up to that point.”

At NIRSA 2015, Emily was introduced to many programs and institutions that were completely new to her. She also spent time volunteering at the NIRSA Foundation Booth. “I loved getting to work at the Foundation Booth during the conference—helping to sell raffle tickets and raise funds,” she says. “I got to chat with so many different folks from all around the country. I followed up on a lot of those connections post-conference, and I’m still in touch with some of them!” In fact, she calls these connections invaluable. “It’s fun to see NIRSA emails or updates about folks around the country and remember moments when I’ve had valuable conversations with them at regional or annual conferences.”

Given graduate school’s fair share of challenges, Emily found herself considering other career paths outside of collegiate recreation as her time as a GA wound down. She credits her open mind at the time in part to the scholarship she received, which “was a reminder that not everyone’s path looks the same, and that you shouldn’t place your worth in your identity within a single career path. There are endless opportunities, and my experience in undergrad and grad school prepared me for a variety of paths—both within and outside of collegiate recreation.”

“There are endless opportunities, and my experience in undergrad and grad school prepared me for a variety of paths—both within and outside of collegiate recreation.”

Emily decided her next role would be as an admissions counselor at St. Edward’s University in Austin, Texas. She stayed at St. Edward’s for a year, and during that time she says, “I was able to learn how to work well on a team and figure out what I wanted most in a work environment. My job on the admission team traveling around the state and the country was one of the most fun jobs I’ve ever had. It set me up well to manage the parts of my job that I do now, and to look for opportunities to work on areas of growth.” What she managed to learn from her undergrad work at Oregon State, her graduate work at UT Austin, and her time in admissions at St. Edwards all helped set her up for success in her current position as the Operations Coordinator for the Adventure Leadership Institute (ALI) at Oregon State University. She joined Oregon State as a professional staff member in 2016.

Though she’s come somewhat full circle in her collegiate recreation career—from an OSU undergrad rec employee to an OSU rec professional staff member—Emily is candid about how she had no idea for the longest time that campus recreation was even a profession. “I was completely surprised that this is a profession, a field I could go into,” she says. She really appreciates the mentors she had as an undergraduate student who were inexhaustible wells of support and guidance as she figured out what she wanted to do.

The two mentors who have been most influential for Emily are Sheila Evans, ALI Club & Community Adventure Leadership Coordinator at Oregon State, and Josh Norris, ALI Director at Oregon State. She learned from them as an undergraduate and now works alongside them and continues to learn from them as professionals. “I met both of them when I was still going to another institution, and my connections with them and the program convinced me to transfer to Oregon State University to pursue the Adventure Leadership Certificate program and get more involved,” she says. Sheila really helped Emily see herself as an active and valuable member of the rec field. “It was so cool to see a successful woman in the outdoor field,” says Emily. “It was encouraging to know that you didn’t have to fit the stereotype of being a ‘climber bro, etc.,’ to be an influencer in this field.”

“It was so cool to see a successful woman in the outdoor field. It was encouraging to know that you didn’t have to fit the stereotype of being a ‘climber bro, etc.,’ to be an influencer in this field.”

Josh is Emily’s current supervisor and has been the ALI Director since she was an undergrad at OSU. “Josh,” says Emily, “has influenced my growth in the field by giving me challenges to work through and a lot of autonomy to figure out how to work in adventure education. He’s great at hiring folks with very specific skills that fill the gaps in our program and encourages us to develop new skills and work well together.” His thoughtful mentorship has made a real difference for Emily. When she was an OSU undergrad, he encouraged her to pursue professional development opportunities, apply for GA positions, and to network with others in the field.

On top of all that, he continued to stay in touch with Emily even after she graduated from Oregon State. “I appreciated that he kept in touch with me through grad school, checking in to see how things were going and if I needed to process anything or think through what the best next steps would be for me,” says Emily. This level of mentorship has continued as she joined the professional staff at OSU. “Josh is really good at advancing strengths, helping you identify and work on growth areas, and developing a strong team that cares for each other and works together for the good of our students and our program.”

These strong mentors have inspired Emily to find ways to give back and she has since taken up the role of mentor herself, striving to support the students who cross her path and reiterating to them the transferable skills at the heart of campus recreation. “I’ve been working lately with students who are about to graduate,” she explains. She feels a responsibility to help them articulate the experiences they’ve had and all the valuable skills they’ve acquired through their work in rec—skills that will be very valuable to have on a resume and will no doubt catch an employer’s eyes.

The value of collegiate recreation and the NIRSA Foundation

“I love that my job is focused on healthy living, growing community, and learning new things.”

Emily firmly believes in the value of recreation and has zero hesitations in saying “I love that my job is focused on healthy living, growing community, and learning new things.” She started in rec as an undergrad with barely any outdoor experience, but by the time she graduated she was organizing and leading group backpacking and climbing trips. She calls her personal journey “just one of hundreds of examples of growth experiences for students in campus rec. Everything we do from the classes we offer to the positions we give to students to the purchases we make focus around developing community and making adventure education accessible.”

“This is a great environment for growth, whether you’re a student or a full-time staff.”

As her faith in the good that collegiate recreation can do remains strong, so does her support of the NIRSA Foundation. “When I donate to the foundation, I know that my contributions will help other students have stories like mine,” Emily explains. “There are a lot of students who would greatly benefit from attending a NIRSA conference but may not have the means to do so. Donating is my way of giving back to the organization that contributed to my path! Thank you, NIRSA!” 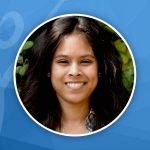 Nazifa Islam is currently the Communications Coordinator at NIRSA.