This highly anticipated tournament is made up of four divisions — Men’s and Women’s Championship and Men’s and Women’s Open. The tournament’s co-directors—Doug Ewing, Associate Director of Campus Recreation at Arizona State University and Randall Ford, Associate Director of Recreational Sports at the University of Texas at Austin—have been diligently working with the regional coordinators to complete the competitive and intense regional qualifying events. “After two great weekends of intense soccer across the country, it is now time for the regional powerhouse teams to bring their game to Arizona,” Doug says. “So far, many familiar teams have received automatic bids, including many former national champions. We also have a few new teams receiving the automatic invitations and at-large bids to add some unknown contenders to the 2013 national tournament.” 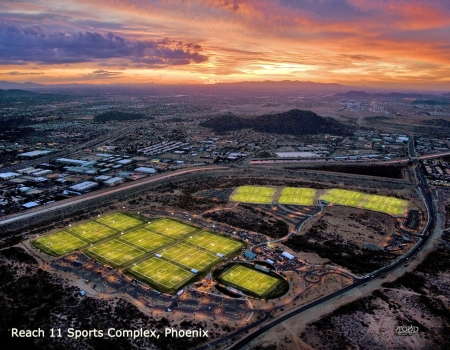 “There were only 15 teams the first year at the University of Texas at Austin,” Randall adds. “I never thought at that time we would become a premier soccer event and host 96 collegiate club teams.”

With the incredible and rapid growth—in both size and competition—this tournament has seen over the past twenty years, participants can expect an event worthy of being the pinnacle of their collegiate soccer experience. Expect, too, some familiar faces and blasts from the past, as the National Soccer Championships celebrates this amazing milestone.

Thanks to BRINE, the official ball of the NIRSA National Soccer Championships, Alan Poizner, the official photographer, Reach 11 Sport Complex, and the Phoenix Sports Commission for their support with what is sure to be another outstanding NIRSA tournament.